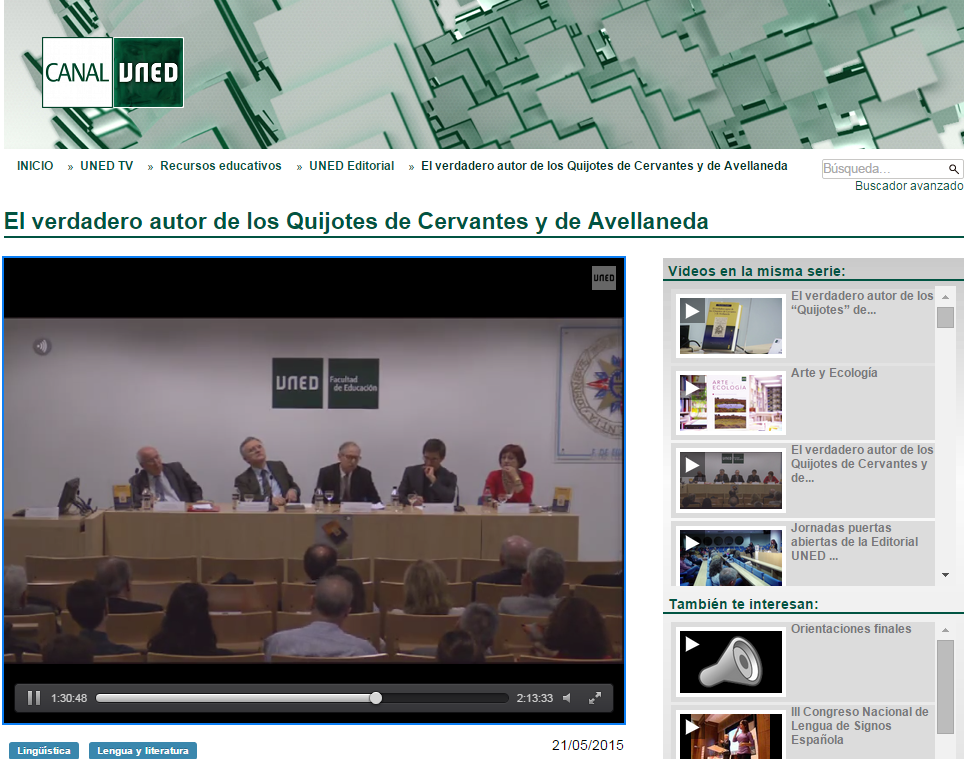 The Group of Medieval and Renaissance Studies together with the publishing houses of UNED and BAC presented the book El verdadero autor de los "Quijotes" de Cervantes y de Avellaneda ('The true author of the 'Quijotes' of Cervantes and Avellaneda'), by Francisco Calero Calero. The book is the tenth volume in the Collectio scriptorum mediaevalium et renascentium series. The event took place on 20 May, 2015 in the Salón de Grados of the Faculty of Education.

The book has two main objectives. First, it sets out to prove that the supreme work of universal literature that is the Quijote could not have been written by the 'lay genius' Miguel de Cervantes Saavedra, whose life is fairly well documented. Professor Calero's premise in making this affirmation is that the book, in addition to evincing a monumental imagination, attests to an extraordinary degree of erudition as well. The Quijote brings together a trove of knowledge accumulated by Greek, Hebrew, Latin, Medieval and Renaissance writers. To be able to read such authors, Cervantes would have had to know these languages; but and in fact, he did not. Cervantes' case is not so different from that of Shakespeare, whose authorship of numerous works has been brought into question by British scholars for similar reasons.

The second aim of the book is to show that the true author of the Quijote is Juan Luis Vives, Spain's first and most universal humanist, who would have had the mixture of culture and literary genius necessary to create such a masterpiece. Professor Calero makes a comparison of more than four hundred texts from the Quijote with Latin works of Vives, revealing a similar, identifiable thought process. The author makes the case that there is more than enough evidence to attribute the true authorship of the Quijote to Luis Vives and not Miguel de Cervantes.