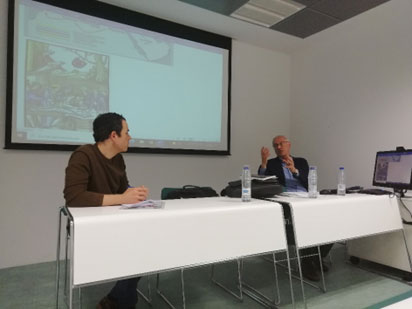 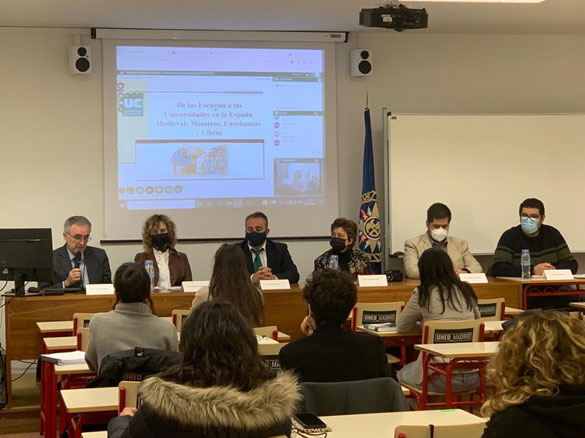 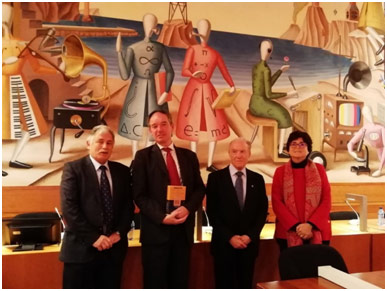 Under the title Political Education in History, the Group of Medieval and Renaissance Studies convened, on 17 and 18 December, its own researchers and others invited in order to participate in a new seminar, through presentations, communications and debates. The sessions took place in Andrés Bello Room of the Technical School of Computer Engineering (UNED). The Proceedings of the Seminar will be published by Dykinson Publishing House.

Professor Ricardo Rovira Reich, president of Civilitas-Europa, referred to political education in Greco-Roman antiquity. Next, Javier Vergara Ciordia, Professor of Theory and History of Education and director of GEMYR, intervened with a paper on Political Augustinism and education of princes. Alicia Sala Villaverde, Ph.D. in Pedagogy, who talked about Restore the political issue in the Lower Middle Ages, the challenge of Cristina de Pizan and Victoria Atlas Prilutsky, Ph.D. in Hispanic Philology, with an intervention on Sem Tob de Carrión and the political education in Judaism. 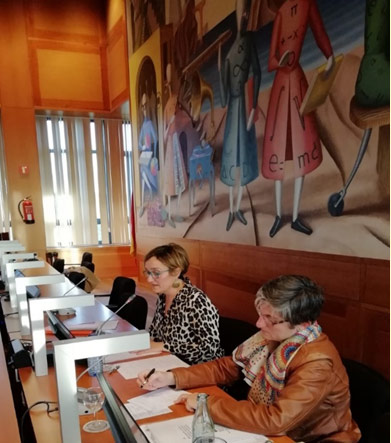 Alicia Sala Villaverde during her speech. She was presented by the doctoral student Lía Viguria.

The following day, the participation of the doctoral student Arturo Torres García dealt with Formation of the conscience of the rulers through the pedagogy of Erasmus. He was followed by Rafael Alvira Domínguez, Professor Emeritus of History of Philosophy, with a paper on Political Education and Modernity.

In the afternoon, the presentation of the book written by Juan Fungerio, Dutch humanist: The good teaching and education of young people took place. De puerorum disciplina et recta educatione liber (Antwerp, 1584), thirteenth volume published under the auspices of the Group of Medieval and Renaissance Studies and the publishers UNED and Library of Christian Authors. It took place with the participation of Professor Beatriz Comella Gutiérrez, author of the introduction and historical-pedagogical study and Virgilio García Rodríguez, translator of the original Latin text,. The event was attended by Professor García Llamas, Dean of the Faculty of Education and Mr. Marc Calcoen, Ambassador of Belgium in Spain, Herminia Calero, Director of UNED Publishing House, Jorge Juan Fernández Sangrador and Juan Antonio Mayoral, General Director and Director of publications, respectively, (Library of Christian Authors). A copy has also been delivered to Mr. Matthijs van Bonzel, Ambassador of  Netherlands in Spain.

From left to right: the Dean of the Faculty of Education, the Ambassador of Belgium, Virgilio García, translator, and Beatriz Comella, author.

In addition, the ppearance of the following volume of the collection was announced: The Treasure of the City of Ladies, by Cristina de Pizan, translated, from the middle French, and studied by Professor Alicia Sala Villaverde.

Interdisciplinary Seminar: Censorship and Books in the Modern Age 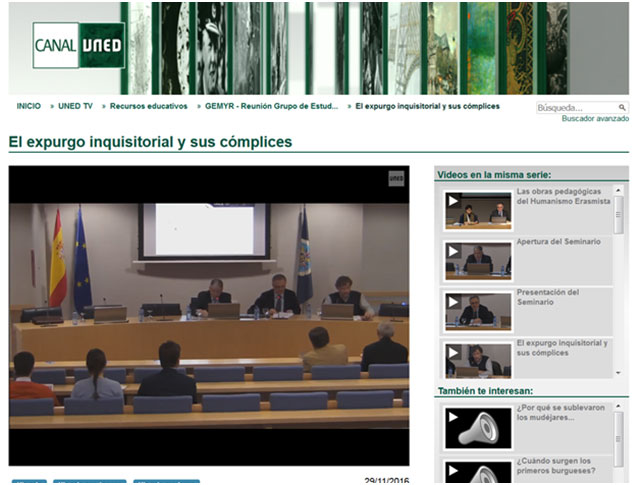 The talks and the papers from the seminar will soon be published by Editorial Dykinson.

The Annual Meeting of GEMYR. 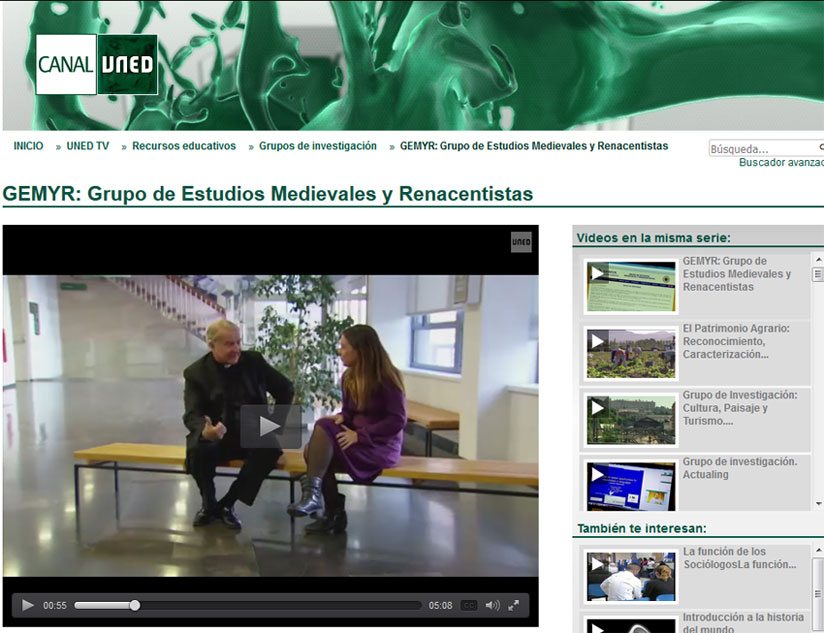 The Annual Meeting of GEMYR was held in the Assembly Hall of the Faculty of Education, UNED, and attended by the Dean. First, the Director of the Research Group, Professor Javier Vergara outlined the progress of the papers and publications. Next, Professors Butiña, Coronel Ramos, Laspalas, Comella and Dr. Alicia Sala informed about their latest research. The meeting ended with a talk by Professor Ricardo Rovira Reich on La formación humanista de los gobernantes: su aplicación hoy (Humanistic Education of Politicians: its application today) after which a member of the Centro de Medios Audiovisuales (CEMAV) (Audiovisual Media Centre) UNED interviewed the speaker. 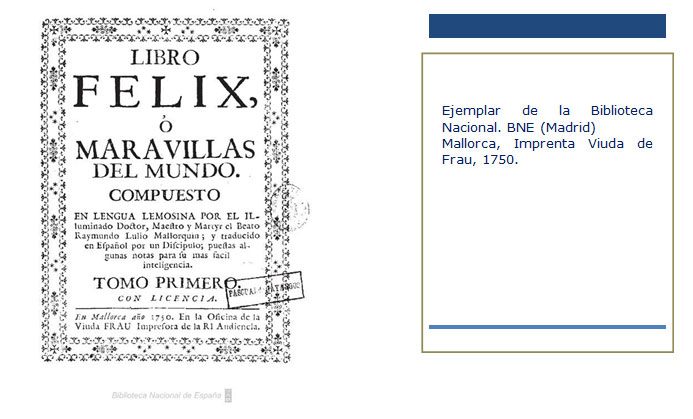 Presentation of the book Félix o Libro de Maravillas (Felix or The Book of Wonders) by Ramón Llull at the Faculty of Education, UNED in a new volume of the Collectio scriptorum et renascentium series on 29 June 2016, with the participation of Julia Butiña and Fernando Domínguez Reboiras.

Dr. Butiña is a professor of medieval Catalan literature (UNED 2009) and head of the Research Group on Ramón Llull (Félix: 2007-2012). Dr Domínguez Reboiras, whose main work is the critical review of the Latin work of Ramón Llull, is a member and scientific collaborator of the Raimundus-Lullus Institute of the Albert-Ludswig University of Fribourg.

The protagonist of the Book of Wonders is a young man, Felix, whose father sends him out into the world to wonder and marvel at the evil around him. During his journey Felix observes and analyzes the universe in ten books or sections: (1) God, (2) angels, (3) the heavens, (4) the elements, (5) plants, (6) metals, (7) animals, (8) man, (9) paradise and/or hell(10). An order of things that represents the idea of the world as a divine creation.

Descriptions of objects and narration of incidents are mixed with examples, stories and episodes in the form of dialogue with some philosophers who resolve all Felix's doubts and misgivings through reason, enigmas and parables. His pilgrimnage reveals the enormous contrast between the perfect and beautiful world in which God placed man and how man commits evil and destroys the world. While creation is orderly and perfect, man, having free will, does what he should not do and turns everything upside down, thus destroying this perfect order.

The Book of Wonders is therefore an exhortation to correct human endeavor against the backdrop of a perfect and orderly divine creation. Man should behave like the other creatures, but only man – oh wonder! – is capable of acting against this order. Understanding that man can and has to freely follow the natural order God desires is the basis of all human moral that Llull tries to transmit in this beautiful scenario.

The Group of Medieval and Renaissance Studies together with the publishing houses of UNED and BAC presented the book El verdadero autor de los "Quijotes" de Cervantes y de Avellaneda ('The true author of the 'Quijotes' of Cervantes and Avellaneda'), by Francisco Calero Calero. The book is the tenth volume in the Collectio scriptorum mediaevalium et renascentium series. The event took place on 20 May, 2015 in the Salón de Grados of the Faculty of Education.

The book has two main objectives. First, it sets out to prove that the supreme work of universal literature that is the Quijote could not have been written by the 'lay genius' Miguel de Cervantes Saavedra, whose life is fairly well documented. Professor Calero's premise in making this affirmation is that the book, in addition to evincing a monumental imagination, attests to an extraordinary degree of erudition as well. The Quijote brings together a trove of knowledge accumulated by Greek, Hebrew, Latin, Medieval and Renaissance writers. To be able to read such authors, Cervantes would have had to know these languages; but and in fact, he did not. Cervantes' case is not so different from that of Shakespeare, whose authorship of numerous works has been brought into question by British scholars for similar reasons.

The second aim of the book is to show that the true author of the Quijote is Juan Luis Vives, Spain's first and most universal humanist, who would have had the mixture of culture and literary genius necessary to create such a masterpiece. Professor Calero makes a comparison of more than four hundred texts from the Quijote with Latin works of Vives, revealing a similar, identifiable thought process. The author makes the case that there is more than enough evidence to attribute the true authorship of the Quijote to Luis Vives and not Miguel de Cervantes.

GEMYR celebrated its 3rd international meeting in the Faculty of Education of the UNED.

GEMYR celebrated its 3rd international meeting in the Faculty of Education of the UNED. 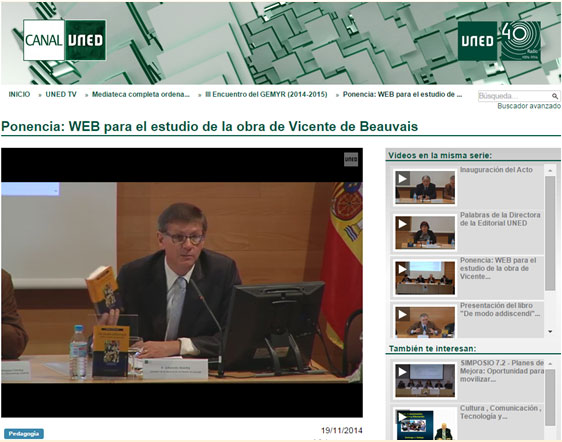 The chairman was Professor José Luis García Llamas, Dean of the Faculty. The event was organized to present Gilbert de Tournai's latest work, De Modo Addiscendi ('On the mode of learning'). Javier Vergara Ciordia and Virgilio Rodríguez García are the editing authors of this bilingual publication –the ninth volume to appear in the Collectio scriptorum mediaevalium et renascentium.

Herminia Calero Egido, Director of the UNED publishing house, and Francisco Calero, sub-director of GEMYR, participants in the presentation too, provided a preview of what will be the tenth volume of the Collectio: 'Juan Luis Vives, verdadero autor del Quijote' Juan Luis Vives, true author of the Quijote.

Dr. Johannes Voorbij, Advisor to the Rector of the University College Ghent (Belgium), special guest at the presentation, spoke about the origin and development of the web page about Vicente de Beauvais, the thirteenth century French encyclopedist and pedagogue.

After the lectures, Rafael Fermín Sánchez Barea, Joint secretary of GEMYR, moderated an open discussion with the audience.

A complete recording of the 3rd GEMYR's International Meeting (2014-2015), including contributions by speakers and participants, can be viewed on https://canal.uned.es/serial/index/id/1484.

The talk given by the guest speaker Dr. Johannes Voorbij can be seen on https://canal.uned.es/mmobj/index/id/22709.

The posthumous work of professor José María Quintana Cabanas, who passed away 31 May, 2013, was presented in the Faculty of Education in an act presided by the UNED Vice-Chancellor for Research, Ricardo Mairal Usón and the Dean José Luis García Llamas on 26 March. The book, Pensamiento pedagógico en el idealismo alemán y en Schleiermacher ('Pedagogical Thought in German Idealism and in the Schleiermacher'), was once again jointly published by UNED and BAC. 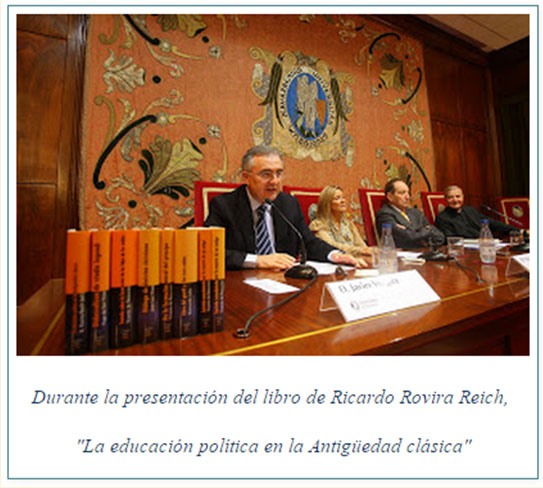 El enfoque sapiencial de Plutarco ('Political Education in Classical Antiquity. Plutarch's sapiential approach'). In this work we find an impassioned plea for a return of dignity and values to the realm of politics, where they have always been present. As the author points out in the final pages of the book, "political activity has always been considered [...] a task of special nobility. It is only logical that it should be so, owing to the natural hierarchy existing in the order of its objectives". (P. 517. Quoted by José Ángel García Cuadrado in the on-line legal library www.vlex.es).

The 2nd international meeting of GEMYR took place in the Central Building of the University of Navarra (Pamplona).

Its theme was announced in the title "The masks of Education in modernity." After welcoming the participants, Francisco Javier Vergara Ciordia, director of GEMYR, gave a brief synthesis of the research trajectory carried out by the group since its creation. Two round tables were held: Plagiarism and masks in modern works: the Quijote case, led by Francisco Calero Calero, took the auditorium by surprise with a ground-breaking hypothesis regarding the authorship of the Quijote, while Political Education in the Modern Age, presided by Marco Antonio Coronel Ramos, dealt with the work of the humanist Juan Luis Vives, examining its place in cultural context of Europe and its repercussion the religious reforms of the Spanish Renaissance. The session was then opened to questions and comments by the attendees, many of whom participated actively.

Celebration of the first international meeting of GEMYR at the Faculty of Education of the UNED.

Celebration of the first international meeting of GEMYR at the Faculty of Education of the UNED. The following topics were addressed: Ideals of formation in Eastern and Greco-roman culture; pedagogical renovation in the early middle ages; pedagogy during the Humanist Renaissance; the Age of Enlightenment and the modern era; pedagogical marginalization and inclusion in the 20th century. Eleven papers were given and in all nineteen articles were published in the work Ideales de formación en la historia de la educación ('Ideals of formation in the history of education'), which was coordinated by F. J. Vergara Ciordia, R.F. Sánchez Barea and B. Comella Gutiérrez. (Madrid, Editorial Dykinson, 2011, 833 pages). The prologue to the volume was written by Antón Costa Rico, president of the Spanish Society of the History of Education (SEDHE), who was also in attendance at the event.

Members of the SEDHE were then given copies of the minutes from the meeting.